This project was launched in 2009 when Joyce Chimbila started working in Old Mushili with a feeding project for disadvantaged children and orphans. This then grew into a preschool to prepare the children to enter government schools. However, when these children were rejected by those schools (primarily because they were too old) Joyce started a Grade 1 school.

After 12 years the project now supports a Kindergarten to Grade 7 Primary School and supports their graduates as they progress through government High Schools by scholarships.

At the end of this year, the first group of students will graduate from high school and will be applying for tertiary and vocational training positions.

There is the original (developed) facility in Mushili where the school is based and a four-hectare block in Kaloko where food and income-generating activities are run. These currently are a piggery, cattle and concrete brick production. Income is also generated by the sale of excess food production.

By mid-June, a new 4 classroom building will be completed and this will become the main school campus.

The Context of the Project

Zambia, once prosperous, had a major decline in its economy between 1980 and 2000. Economic reform has led to an improvement in the current century but the distribution of this improvement is not uniform. Alcohol abuse is common, with attendant family violence. With more than one-sixth of the adult population living with HIV/AIDS Zambia is among the world’s countries most severely affected by the disease.

Early deaths from HIV/AIDS-related illnesses create a growing number of orphaned children and deprive the country of expensively trained skilled professionals. Malnutrition, caused by poverty, is widespread, particularly in rural areas. Public education still requires payments beyond the capacity of much of the population.

There are two public hospitals in Ndola with a total of approximately 1,000 beds. They operate on a public/private model. Local Health clinics provide most of the care required but require payments.

Hydroelectricity sales to surrounding countries are an important source of income for Zambia and given some priority. Mining activities are given a similar priority. During times of relatively low rainfall, local users have unreliable electricity supply. The food production activities (and income-generating brick construction) have suffered over the past year.

A 4-hectare farm block has been bought nearby at Kaloko where food is grown, pigs and cattle provide protein for developing minds and bodies and aid self-sufficiency. And on this block, a new school is to be built together with accommodation for children in crisis.

This block will become the main school campus.

What is Needed Now

Please Join us in making it happen by donating with the donate button below.  Thank you.

DONATE TO THIS PROJECT
Donate to This Project
ZMB-500 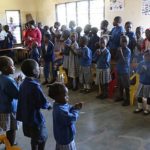